[leeastone's diagram is correct. Understanding the diagram is not necessary as long as you follow this guide to jamming successfully: https://forum.jammr.net/topic/1724/.
–stefanha] 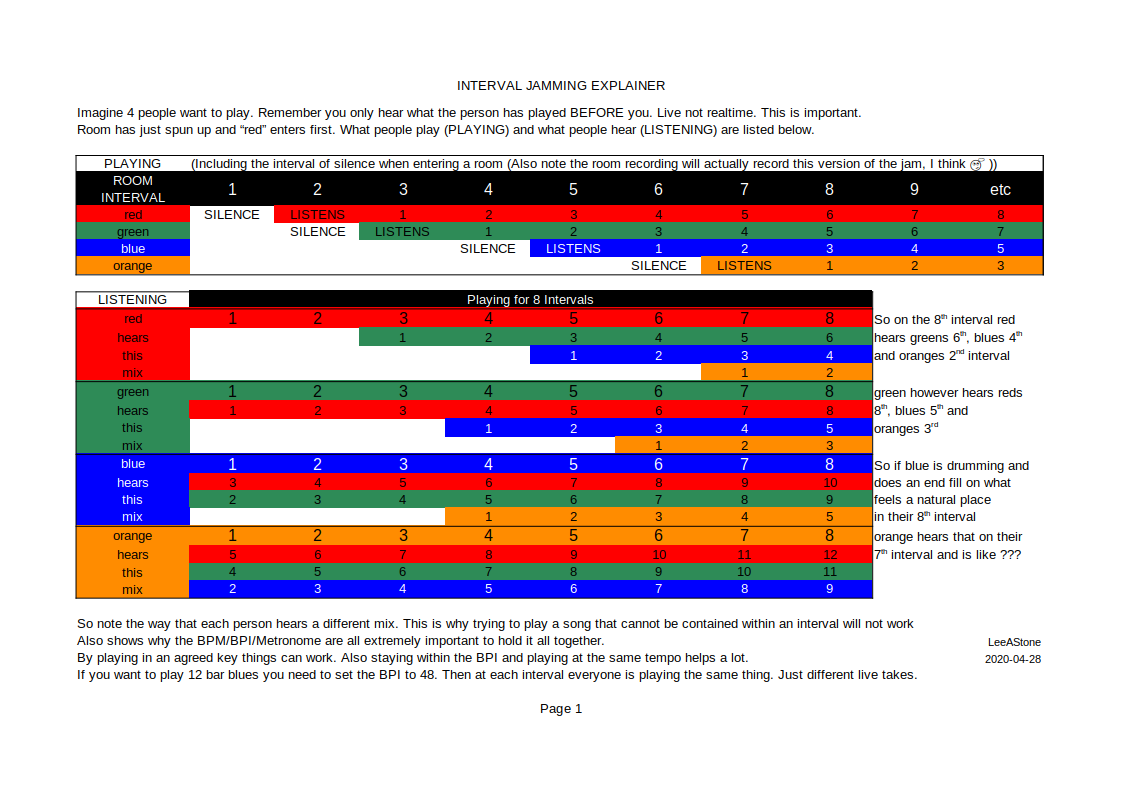 You are also right that the server records the jam as shown in the first table.

It is hard for most people to think about how everyone hears a different time-shifted version of the jam. This is why I focus on explaining the two rules for playing in sync instead:
1. Play at the same tempo as jammr's BPM setting.
2. Make sure the BPI setting matches the length of the chord progression in beats.

Anyone following these two simple rules doesn't need to worry about understanding the details.

The details are interesting if you want to find cases where you can play in sync successfully without following these rules. There are exceptions to the rules although they are limited!

For example, if there are just two people in a jam and you don't care about the recording being in sync, then you can play alternating A and B intervals instead of just repeating the same A interval every time.

Usually it's best to stick to the rules though

Thanks again for sharing this. I'm sure it will help others understand how jammr works more deeply.
bnorthup
what does a chord of % mean?
stefanha
Hi bnorthrup,
I'm not sure, can you post a full example of a chord progression that uses ‘%’ notation?

bnorthup
someone had shown a valid chord on each side…. and a % sign where the chord would have been now after thinking about it… it must refer to the division (timewise) of the chords on each side…. so that the total counts (before completing the chord loop) stays simple….. sort of like a common denominator in math..
stefanha
We just talked about it in the jammr chat, but in case someone else is reading this forum thread: % was probably used as a repetition sign. For example, instead of writing G C D D they might write G C D %.
This is a "lo-fi" version of our main content. To view the full version with more information, formatting and images, please click here.
Powered by DjangoBB